After 90 minutes in a minibus the lads finished singing every chant you could ever think of at the top of their voices and we arrived at Truleigh Hill, the start of the Junior Bash 2015!

Time for a quick cup of squish…

After arriving and dumping bags, we then departed on a short night walk down the nearby common area. Rob Case-Green set juniors off armed with torches in pairs to find the disguised leaders in a good olé game of hide of seek!
With leaders had found and the winners awarded their prize, we trekked back up the hill, back to the nice warm hostel.

After getting dried off, putting a thick pair socks on and having been supplied with a warm drink we all sat down to discover the series for this weekend! Daniel: Dare to be Different.
The series saw how Daniel showed great faith in God in times of trouble and also saw a number of leaders get into trouble (some more so than others!) as they completed their dares!
In this first session Tufty introduced us to Daniel and his mates (MyShack, YourShack and Abungalow?)

With the lads well introduced to Daniel, we had a quick game of pillow fighting and quickly dispatched off to bed.

Up at the crack of dawn (About 7:45) ready for an action packed day ahead!! 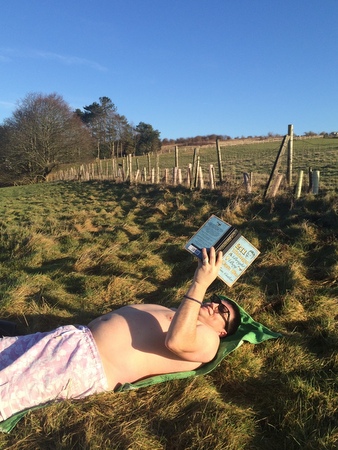 Paddy kicked off the day trying to get lads to interpret his dreams and gave us a session on Daniel’s actions when King Nebuchadnezzar (King Neb for now!). Also that morning we saw Jagat complete his first dare of the weekend, a lap of the house wearing his swimming trunks and Rob had a sunbathe in a field (January tends to be a little chilly!)

We set off into Brighton to play games on the beach and see Graham brave the ice waters for a swim to complete his dare and Ben was bundled on by every lad on the beach too! Lunch time struck so we headed across to the world famous Harry Ramsden’s for a giant-sized portion of cod and chips!

With full bellies we headed across to the pier to spend our pocket money on doughnuts and 2p machines!

After a fab afternoon in Brighton we departed for the leisure centre! This saw the Weasel (Paddy) take on a more aquatic role of an Otter as his donned his swimming cap and arm bands to complete his dare. 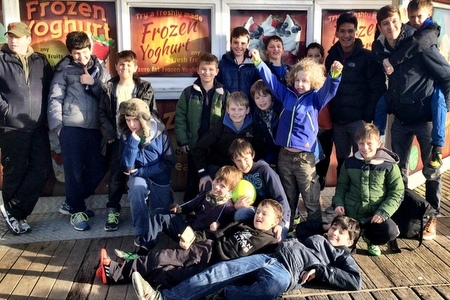 Returning to the house for some well deserved nosh! Matt Lee was assigned to eat a bowl of flaming hot chilli (This was still flaming 24 hours later!) Colin had to lick 3 leaders toes and Jagat  drank a bottle of condiment.

Rob and Jagat then took us for a heated session on Daniels friends being thrown into the furnace!

The final day commenced with Graham and Rob talking to lads about Daniel being thrown into the lions’ den. Shortly after, lads welding their plastic trays and we wandered across to the nearby hill for some bum sliding races! Its been said Matt Lee was going so fast he nearly made it to the Isle of Wight.

With the lads are well and truly worn out we head back to the hostel to clear up and head home.