At last released from the shackles of lethargic summer-time Guildford, four minibuses full of lads embarked on a voyage towards the unknown.

In a manner comparable to that of Scott or Amundsen, except with fewer dogs, the party ventured relentlessly southwards, with only one goal in sight: The Lizard peninsula.

Many hours after leaving, we arrived at the promised site, and were greeted by white canvas, blue sky, and the advance party. After an invigorating (cold!) swim, and the first of the rather unique camp meal times, we played the inaugural wide game. A mayhem of running and bundling with glow sticks came to a surprisingly injury-free close in time for cocoa, and the introduction to the Spiritual series.

The following morning we played the aptly-named ‘Hunt the Lizard’, although my private hobby involving Komodo dragons and a submachine gun was no help to me: a series of cryptic clues led us to the locations of small plastic lizards in the surrounding area. After this, some free time allowed us to get to know the hidden coves and picturesque towns of the area better for ourselves. 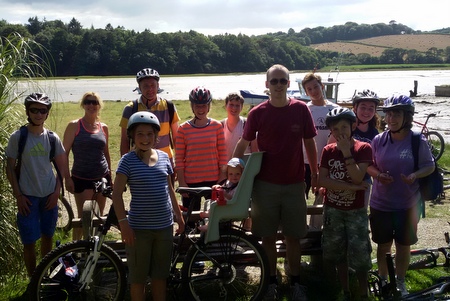 On Tuesday we were granted the liberty of choice (‘choice’), with six options of how to spend the day. Would we emulate McIlroy with a round on the golf course, or exchange the sand of the bunkers for that of a beach? Would we cross Cornwall in Chris Froome fashion, on the Coast-to-coast Trail, or would we skin rabbits, like Ray Mears?  Thankfully, the weather was glorious, and my choice of a day on the beach was well spent playing football, body boarding, and slowly turning a shade of lobster.

Another highlight of camp was the day in St Ives, with its bustling crowds, vast sandy swathes, and large numbers of coffee shops, there was plenty to see and do. Bundling never goes amiss when there’s a grassy hill around too, and we did plenty of that! With our ears still ringing from the junior’s ‘fun-snaps’, the day was capped off nicely with some fish and chips on the beach. And it wasn’t even raining… 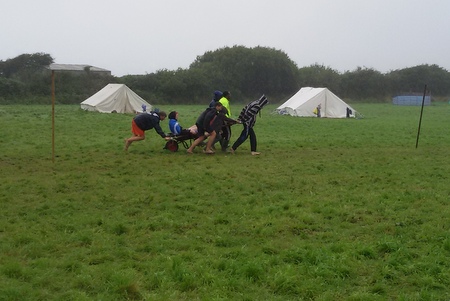 It would, however, have been a disappointing British summer, had the rain not begun at some point. Soon enough the fountains of the great deep broke forth, and the windows of Heaven were opened. We were informed there was a natural spring under the field (not of the kind that wells up into eternal life) so very quickly the ground became a muddy quagmire. The mud clogged up the minibus wheels in the field entrance and getting into and out of the field became a test of nerve.

Thankfully the meeting tent was in a dry part of the field, and when we went in there, we were out of the miry bog and given a firm place to stand. Moreover, meeting by meeting we learnt, from the Gospel of Luke, how God could lift us out of the miry bog of our guilt and shame for the wrong things we’ve done in life, and give us a secure footing in His mercy and grace. It was, as ever, a great joy to hear again of Jesus sacrificial love for us, manifested in his death on the cross.

Camp was a fantastic two weeks, and we did many activities that I haven’t time to mention here, not least a whole day of water sports! There are also many people to whom a great deal of thanks is owed for the smooth-running of camp: the cook team, support team and camp leader (Doug) are fantastic and untiringly committed: what a fantastic camp they have produced! I would highly recommend camp to anyone, what an amazing place to get to know friends, explore faith, and have (riotous) fun!