It’s was early December so only one thing was on the Inters minds…WESTBROOK!!!! A weekend stay on the Isle of Wight was not to be missed… and for 29 lads and 9 leaders they didn’t miss it!

The weekend started with a meet up at Guildford Cathedral before jumping into 3 minibuses and a car and a road trip to the coast. Obviously there was the usual Westbrook panic of lads running late and the fear of not making the ferry, but fortunately both fears amounted to nothing and we were soon crossing the channel. A number of sugar sachets and free milks later we arrived at the national  Urban Saints residential centre of Westbrook. What a blessing, a huge house, great grounds and facilities, and all set up purposefully for a group of rowdy young people.

The weekend got off to a flyer with a short thought from the Parable of the sower followed by the adrenaline pumping numbers game. With the fear of being punished with shaving foam, cold baths, baby food etc. the group battled to obtain a block with a low number on it, whatever that was! Needless to say there were winners and there were (cold and messy) losers. We won’t talk about the pillow fight the lads decided to then have at 3am that night/morning……Disclaimer: Parents – we didn’t plan it, endorse it or encourage it!

Saturday morning was greeted with the new fire drill procedure at Westbrook….thanks for the help in getting people out of bed! Throw a talk in the mix with some packed lunch making,and before long we were at hanging out with Richard at Headhunters. The man, the legend….he certainly knows how to operate a laser gun! Laser quest in the woods was great fun with the orange team losing most games but still having a great laugh. 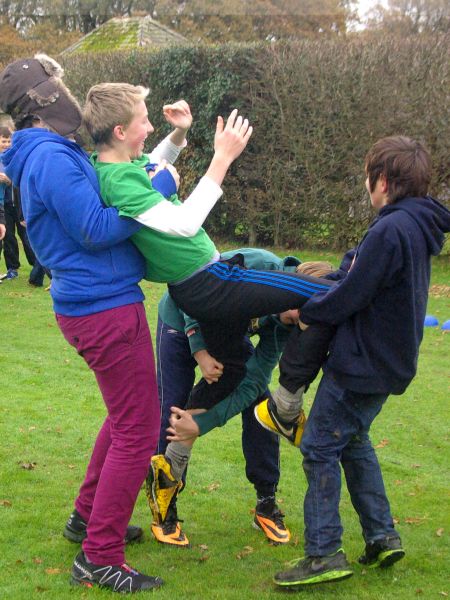 It wasn’t long after headhunters that we were back in the vehicles for the Saturday afternoon big event…..The Big Scavenge! Right lads you have £5, a map, and a list of items you need to get in the space of a few hours. Skip three hours and teams were arriving back at Westbrook armed with items ranging from a tyre, ice cream, christmas tree, a fish and a garlic. Funny how no one managed to convince someone to hand over a bra which had made it onto the list! Once back at the centre we enjoyed another helpful thought and group chat about the Parable of the sower, before having (controlled) pillow fights under strobe lighting, some epic hot chocolates and Monsters University – which Toby seemed to REALLY enjoy!

A Sunday morning lie in followed by a talk and some outdoor games (rugby, football, assault course, 1,2,3 USG etc.) led us to the main event of the weekend…..clearing up all the mess we had made! It’s official year 8′s are by far the messiest bunch by a long way! Weekend prizes were given out (note to leaders: never hand out sweets in wrappers before then going in a minibus – rubbish everywhere!!!), before heading home…via more sugar sachets and free milk!